Erin Brockovich, Stephen Sodorbergh, and the Argument for Environmental Regulation 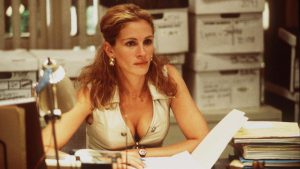 “It all comes down to what this one judge decides”

Erin Brockovich (2000 dir. Stephen Soderbergh) is different from the typical legal movie. There is no climactic trial scene where the orchestral score swells to its peak as the lawyer or the witness gets their big moment to convince the jury. The protagonist is neither the lawyer nor the plaintiff nor the defendant. Erin Brockovich is about the paralegal, the assistant.

The film, famously based on a true story, takes place in early 1990’s Los Angeles where twice-divorced, single mom of three Erin Brockovich (Julia Roberts, in her Oscar-winning role) has reached a low point after being injured in a car accident and losing the resulting personal injury suit. Using her stubborn persistence, she snags a job at her former attorney’s office (Ed Masry, played by Alfred Finney), where she discovers evidence that the Pacific Gas and Electric Company (PG&E) has poisoned residents of the nearby town, Hinkley, CA, with chromium contaminated groundwater. Erin takes the lead on the case, gathering evidence herself, getting to know each and every plaintiff, and blowing past anyone in her way with savage verbal takedowns.

This film has more to offer than similar 90s studio movies because it is refined by the Soderbergh auteur-style. We can see this in the warm, intense yellow filter through which we experience Southern California, contrasted by the clinical, unsettling blue light of the courtroom scene when the PG&E suit is allowed to go forward.

In the vein of the uplifting 90s-2000s mid-budget studio film, Soderbergh doesn’t dwell on the gravity of the situation in Hinkley. There is never any doubt in the viewer’s mind that Erin and Ed will be successful. I was most invested in Erin’s story at the beginning, when we feel the confines of her poverty and her desperation, as she skips meals to feed her kids. Susannah Grant’s script and Roberts’ performance do a great job of portraying the emotional realities of Erin’s financial struggle. After Erin is hired and really gets going on her investigation, the film's stakes start to fall away. Every time the lawsuit hits a roadblock (and it hits many), Erin overcomes it with ease. Ed wants to back out because the suit is growing too expensive? Erin convinces him to change his mind. They need a piece of evidence linking PG&E Corporate to PG&E Hinkley? A mysterious man shows up with the necessary document in one of the next scenes. The fact that this is a movie based on a true story makes it obvious that the legal battle will end in victory for Erin. If not, why would the movie have been made? This gets to the heart of my problem with the film—Soderbergh fails to convey the emotional stakes of the story to the viewer.

And the stakes are high, especially for the residents in Hinkley. In environmental law, people have two options to monitor polluting corporations: regulation and litigation. The film shows us how arduous and even futile litigation can be. The plaintiffs in Erin Brockovich are looking for retribution after they’ve drunk the poison water, after the damage has been done. They have neither the time nor money to go to trial, so they are essentially forced to choose binding arbitration.

And arbitration is scary. There is no jury. As Erin says to Ed in disbelief, “It all comes down to what this one judge decides.” “This one judge” could have a great rating from attorneys, or their rating could be filled with reports of abuse of power and lack of knowledge. If it’s a case in federal court, it could be a political appointee, chosen for their pro-corporate or anti-regulation stance. Our resources are much better spent preventing pollution and other types of environmental harm through regulation rather than punishing the polluters after the fact.

I would like to think that if this film were made today that it wouldn’t stop at condemning the responsible corporation. I think many modern filmmakers would examine why a profit-motivated corporation, given a monopoly by the government, is more concerned with its profit margins than its responsibility to the community it serves. The fact is that 634 citizens (the number of plaintiffs in Erin’s case) shouldn’t be the underdogs in a lawsuit; it shouldn’t be a David v. Goliath metaphor.

Now, if you’ll excuse me, I am going to go listen to 90s Sheryl Crow songs while channeling my inner-Erin Brockovich, taking down the greedy corporations and protecting the rights to clean air and water. Bye!

Assault By Ex-Teacher: OPS Board to consider $625,000 settlement

Unlike most of the common business entities that exist today, the LLC has a fairly brief history in the United States. Entities such as partnerships, sole proprietorships and corporations have existed since the founding of the country. The LLC, however, has only existed in a recognizable form for roughly thirty-five years. What, then, led to the creation of this new entity? The single most important reason for the creation of the LLC was what has come to be known as “the tax-shield conundrum.”