Question 1: Must all congressional districts be the same size?

“Yes. However, for many years state legislatures gave more representation to large, sparsely populated rural districts than to smaller, heavily populated urban districts. In Baker v. Carr (1962), the Supreme Court ruled that all legislative districts must be equal in population, on the grounds that qualified voters were no more or less so because they lived in cities or on farms. The Supreme Court used the notion of “by the people of the several states” in Article 1 along with the Fourteenth Amendment’s “equal protection clause” to require that congressional districts contain roughly the same number of people” (The U.S. Constitution Knowledge Cards ®) 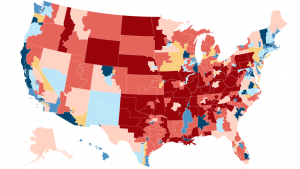 As populations grow and fluctuate, the re-districting of legislative districts has become a hot topic. This is primarily due to the unethical practice of gerrymandering. Gerrymandering refers to, “the practice of drawing the boundaries of electoral districts in a way that gives one political party an unfair advantage over its rivals (political or partisan gerrymandering) or that dilutes the voting power of members of ethnic or linguistic minority groups (racial gerrymandering).” These tactics are called packing and cracking, respectively.

Since states aim to create relatively equal districts based on population, there is a reason some congressional districts appear to look more like the Rorschach Inkblot Test. In fact, you can even check your knowledge with this quiz created by Ben and Jerry’s (Yes, the ice cream company).

However, it is important to note that not all gerrymandering cases obtain the same result. Due to the Separation of Powers and the responsibility of the court to remain non-partisan, oftentimes the U.S. Supreme Court will rule that a case presents a political question rather than a justiciable one. Rucho v. Common Cause (2019) is a recent example in that the court held that “partisan gerrymandering claims present political questions beyond the reach of the federal courts.”

© Trustees of the University of Pennsylvania and Oxford University Press, Inc.

Politicians and sex scandals have been associated with the United States since its inception. (See Hamilton, the Broadway musical). However, the last few months there have been an extraordinary amount of allegations, apologies and confessions in politics as well as the entertainment industry. In the flurry of allegations, what has been lost is that much of the conduct alleged is actually criminal. There is a real difference between criminal sexual conduct and workplace sexual harassment.

Due to the popular show Game of Thrones, the term “bend the knee” has made its way into public conversations. In the HBO show, the term is basically a submission and a pledge of loyalty to a king or queen. In the real world, the term “bend the knee” has also taken on new significance over the last year. Even if you are not a football fan you probably heard about professional football players kneeling during the National Anthem, which is played before a game is started.

Assault By Ex-Teacher: OPS Board to consider $625,000 settlement